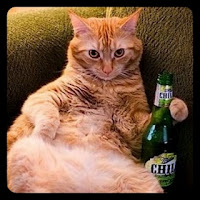 If you compete in sports like cycling, or 'bike riding' as it is known to those out of the peloton, or 'highway bowling' as it known to this guy…

If you are already on this poster, then it’s probably too late.

Most amateur athletes I’ve had the pleasure of talking to (cough, cough – I just can’t seem to shake that one) seem to be quite familiar with the basic principles of Sports Nutrition and can easily reel off a lot of physiological nomenclature such as Glycaemic Index, Muscle Repair, Carbohydrate Loading and Glycogen Depletion. Recovery is one of the most important aspects of Sports Nutrition, particularly for multi-stage events and athletes have learnt that it is important to utilise the Glycogen Window after completing vigorous exercise. Basically, it turns out that the best way to help replenish muscle glycogen (the muscle’s fuel source) is to consume a prescribed amount of carbohydrate with a high Glycaemic Index in the 30-minute window post-exercise – eating sweet things or white bread is a good rule of thumb. Then there’s the Protein Window, which is similar but dictates how much protein to consume post exercise. Protein supplies the amino acids that are important for the synthesis and repair of muscle fibres damaged during exercise.

In the quite recent past (and not too distant present) though, Sports Nutrition was thought of as just another one of those “pseudo sciences” (like astrology, dianetics and doping control) that promised so much but delivered so little. It gave birth to a brand new industry that marketed overpriced gels, bars and powders on the promise of increased performance, quicker recovery and better endurance.

Nasal Delivery will likely become the next craze in Sports Nutrition

Then in recent years some researchers made a breakthrough that changed things forever. It was discovered that chocolate-flavoured milk actually delivered all the necessary nutrients for rapid recovery due to its excellent ratio of sugars, protein and electrolytes. Finding out that chocolate milk was now a valid, scientifically proven nutritional supplement was great news for athletes. I liken it to finding out that watching Internet porn is educational or that playing Sudoku will actually help you make friends. So the 'chocolate milk' discovery certainly made recovery a lot simpler, definitely in terms of exploiting the Glycogen and Protein Windows. But as it turns out, there is another important window that is often overlooked – the Hops Window.

I spent some time discussing this topic with a doctor at a recent multi-day stage race. Sure, he is actually a Doctor of Philosophy (PhD) and his field is Mathematics, but I’m fairly certain that he is still regarded as an “expert” according to the rigorous standards of pseudoscience. While the Glycogen and Protein Windows are primarily concerned with how many grams of carbohydrate and protein should be consumed per kilogram of body weight immediately after strenuous activity, the Hops Window dictates the optimal amount of hops-based fluid that should be consumed post-race in order to maximise recovery.

As you can imagine, a conversation like this about body physiology and nutrition gets quite technical so I won’t bore you with the details:


Don’t ask a doctor about Sports Nutrition unless you are comfortably seated.

A simple rule-of-thumb that you can use to quickly work out the ideal quantity of hops-based fluid that should be consumed immediately after vigorous activity is as follows:
For example, at this particular event (the 12 Apostles Mountain Bike Classic), there was a local craft beer from a brewery called Prickly Moses who, according to their website, harvest local rainwater and then brew all their beers with this 'gift from the gods'. This claim was quickly attacked (or aggressively peer-reviewed) by another doctor (this time with a PhD in aerospace engineering) who pointed out that all water is technically rainwater that has fallen back to Earth after being evaporated from the surface sometime earlier. But this only served to set up a confusing 'chicken-and-egg' paradox that left us wishing for a PhD with an actual doctorate in Philosophy.

Anyway, back to the Hops Window calculation. For a 69kg rider who has just completed a 3-hour race at 2pm, the Hops Window approach dictates that they should aim to consume 2.3 beers (hops-based fluid recovery drinks) per hour, assuming that the local pub closes at midnight.

2.3 Beers per hour, every hour, until closing time to fully exploit the Hops Window.

Now, you might think that this particular rule-of-thumb could get quite dangerous…and you’d be right, because if you are an 80kg rider who’s just finished a 1 hour race at 4pm then you’d need to consume 10 beers per hour in order to maximise your recovery during the Hops Window.

If you thought racing was hard, consuming enough recovery fluid can be a deal-breaker.

This type of complicated data is most effectively conveyed with a clever chart. Now, with a number of different variables here, I’m not entirely sure which format is the best to use, but this one certainly looks pretty cool:

A simple chart to help maximise the benefits of the Hops Window.

So, if you’re serious about improving your recovery during multi-stage events, it might just pay to include the Hops Window in your nutrition plan…and remember to always consult your doctor as there is still no substitute for a professional medical opinion.