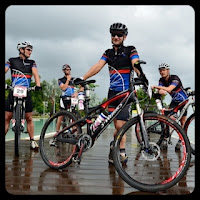 It’s quite unusual to compete in a race in your home country yet still find yourself part of an ethnic minority. For a team of riders based in Fitzroy though, referring to Far North Queensland as our home country is a bit of a stretch. Aside from the fact that they both accept colourful plastic money, Fitzroy and Far North Queensland have about as much in common as a Macchiato and a Frapuccino.


In this year’s 17th Crocodile Trophy, there were probably more Aussies competing than ever before – I counted 21 including Fitzroy Revolution team members (clockwise from top-left):


It’s at this point that you may be wondering if this is a story about some kind of weird fancy dress party that was themed as Angry/Sci-fi/Blackface/Pornstar. But no, I can assure you that this is what people actually looked like during the Crocodile Trophy.

Other Aussies included three of the Subaru Marathon MTB guys from Sydney and Melbourne hard man Brad 'The Euro Whisperer' Davies. Brad had a great knack for making friends with the important Euros and then reporting back with strategic pre-race tactical information. For example, “I was talking to ‘Hasselhoff’ and he said that if we get in an early break the bunch won’t chase” or “I heard ‘Platzerwasel’ say that ‘Schnorkel’ will be following all the moves so there’s no point attacking today”.

Forrest’s own Jess Douglas was there representing for the female sex. Jess rode well and was engaged in a sort of pseudo-battle with Matthias on the general classification. I’ll let Matthias tell you who was victorious in that contest and simply say that it ended up being a close-fought battle. 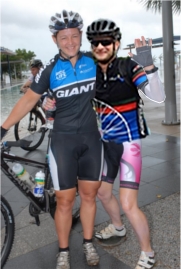 Despite this larger than usual contingent of Aussies, we were still pipped by the Belgians (with a total of 24 riders). Throw in to the mix a cohort of Austrians, a handful of Swiss, Italians and other Europeans (there was a lone Luxembourger and, in the inimitable words of SBS TV’s Mike Tomalaris, a few ‘Dutchmen from the Netherlands’) – and what you have is somewhat of a cultural melting pot – or perhaps a sticky back pocket full of different flavoured gel wrappers that have been baking in 45˚ heat for 5 hours might be a more fitting analogy for this race. Even a few dirty ditch-crossing Kiwis managed to sneak through immigration – but Carl sorted them out during the race.

I realise how important visual communication is at this point, so to (hopefully) paint a clearer picture I have expressed the nationalities represented in pie chart form below: 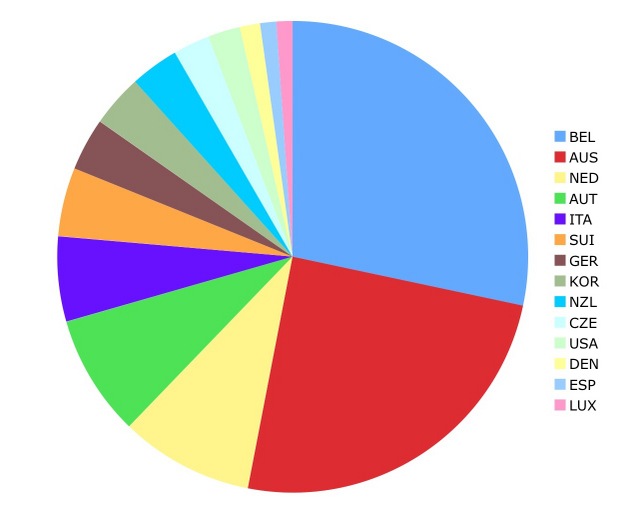 Obviously, infographics help a lot and nobody understands this better than the Channel 9 Cricket Telecast team. Cricket graphics have been leading the way since the early 1980s and over the years have brought us some classics that include 'The Worm', the 'Wagon Wheel' and, more recently, the 'Hawkeye'.

Now…here’s where it gets interesting…if we make some minor changes to the rotation of the pie chart shown above and tweak the colour scheme just a fraction we end up with a graphic that the Channel 9 cricket team would surely be proud of: 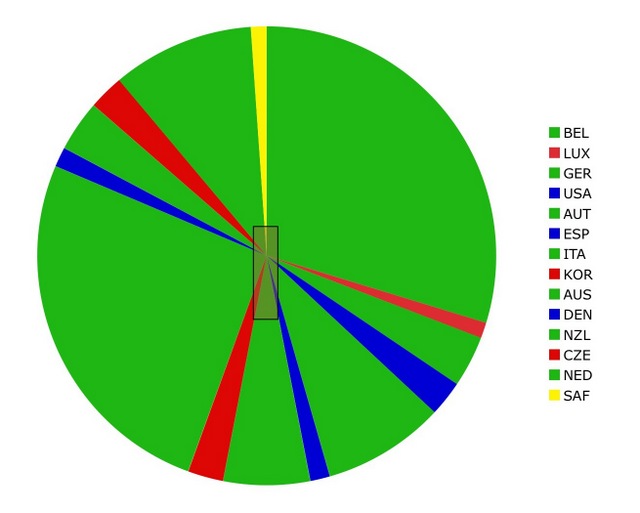 In fact, if you analyse the chart above closely, those keen cricket statisticians among you might notice that it very closely mimics David Boon’s batting wagon wheel from the 1993 2nd Ashes Test. 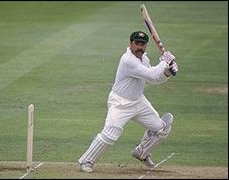 David Boon is most notably remembered for his (as yet unbeaten) record of 52 cans of full-strength beer consumed on a flight between Sydney and London en-route to the 1989 Ashes Series. Boon, also known as the ‘keg on legs’ had a tenacious competitive streak and steely mindset that also helped him become one of Australia’s all-time best batsmen. Personally, I’d like to see Boon, now 50 years of age, get on a mountain bike and enter the 2012 Crocodile Trophy – it’s certainly his type of race – so I’m putting out the challenge. I’d also like to see him attempt to beat his beer drinking record but with ‘XXXX Gold’ – a common beer in Far North Queensland. XXXX Gold has a unique taste that most closely resembles a watered-down version of a bad tasting beer.

And coming back to this topic of interesting infographic parallels just for a moment, if we make some further subtle changes to the colour scheme of the wagon wheel, the resulting graphic coincidentally depicts the taste and quality of the XXXX beer that awaits David Boon’s arrival in Queensland: 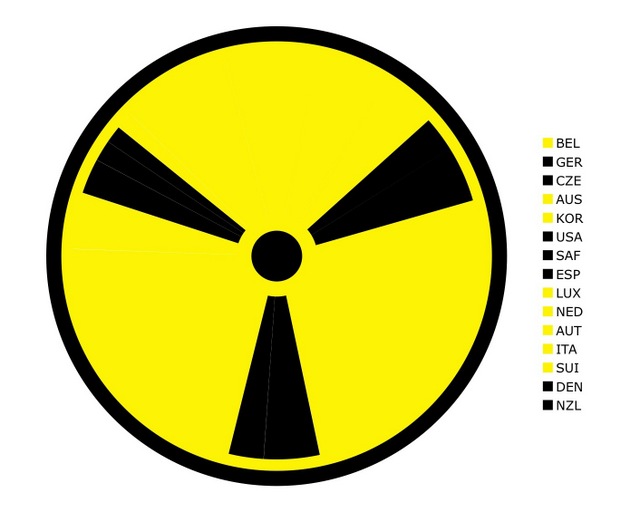 Even without David Boon, the 2011 event still had plenty of characters. One of the more colourful was recently retired Austrian road pro (and Herald Sun Tour Stage Runner Up), René Haselbacher – seriously, he got a 2nd place on Stage 2 back in 2001! Since retiring and moving to Cape Town, South Africa, Hasi has taken up mountain biking – hopefully myself, Duncan, Carl and Matthias will get to catch up with him at the ABSA Cape Epic next March.

The Croc Trophy is billed as the ‘Hardest, longest, most adventurous MTB race in the world’ and it was certainly a challenging experience…for a number of reasons. The racing was typical Euro-style – hard and fast. You can find race reports and results here. It was unlike any stage race I have competed in before and could best be described as cross between the Eurovision Song Contest and Outback Survivor…with a touch of ‘Austrian Backpackers Gone Wild’ thrown in for a bit of a laugh.

Aside from the hard-man racing style, the Europeans also added a lot of flavour to the overall Croc Trophy experience. If you’re not used to seeing a lot of exposed wang, then the Croc Trophy probably isn’t for you. The campsites are often quite remote, the showers very basic and there was a plentiful supply of Euro men who were more than comfortable wandering around in the nude. The fact that this is even noticed is obviously a reflection on Australia’s more conservative attitudes towards nudity however the sight of a fully naked, middle-aged, European gentleman enthusiastically applying ointment to his undercarriage in broad daylight and in full view of the campsite made me wish that I’d stolen an eyemask from the Jetstar flight on the way to Cairns. 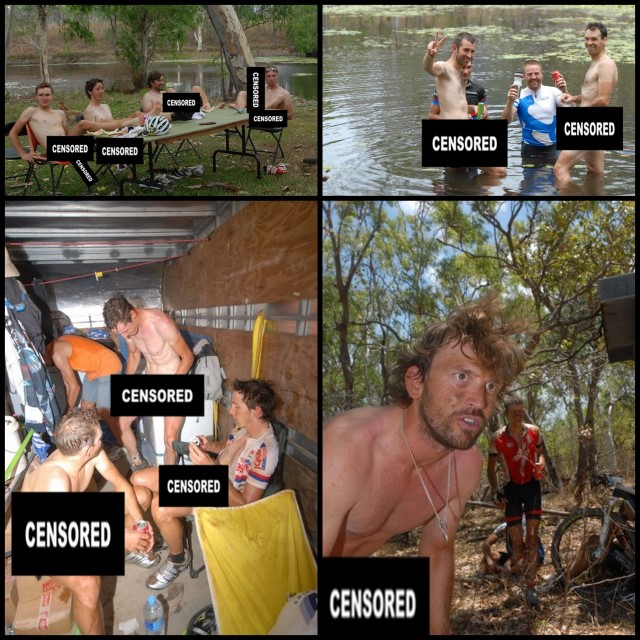 Unfortunately there wasn’t much relief when the Europeans were wearing clothes because despite what you see on the catwalks of Milan, it appears that little, if any, of that stylish European fashion sense has rubbed off on their mountain bikers.

The Australian outback landscapes that the Crocodile Trophy passed through each day were also quite fascinating. One of the more interesting sights are the termite mounds. These can range in size from a few centimetres high up to well over a metre and they piqued the curiosity of a number of riders – I believe that Carl had a very close personal encounter whilst bush-bashing to avoid some sand on Stage 6.

The Korean riders, in particular, were mesmerised by these strange rock-like mounds that have a hard exterior yet also seem strangely fragile. They wondered what was inside and curiosity eventually got the better of them.

The next frame, which unfortunately was not captured by our talented photographer, consisted of the same intrigued Korean rider now pouring Red Bull in to the top of the termite mound, presumably to instigate an evacuation of the wondrous creatures hidden within. Although this wasn’t captured on film, I have taken the liberty of recreating the ensuing event as best I can.

There was plenty of down-time after the finish of each stage and while waiting around for tents to be set up or taking bets on when the food trucks were likely to arrive, entertainment generally came in the form of watching the chaos of each night’s campsite unfold. There were volunteer backpackers assigned to tasks well exceeding their capabilities, drunken doctors attending to the riders’ wellbeing and middle-aged Europeans, well, just being themselves. As I mentioned earlier, it was certainly a diverse international pastiche – and much like the Eurovision Song Contest, the talent on display was often overshadowed by the drama, the emotion and the outfits.

The biggest personality of the race and my personal highlight for the entire event was reserved for the finish. SBS Cycling presenter Mike Tomalaris met the riders at the conclusion of the final stage and then hosted the awards dinner that evening. It was great to meet the man who has done so much to increase the profile of cycling in Australia.

You might be wondering why I appear to be pointing at Mike’s ‘package’ in the photo. If you look closely, I was surprised to discover that his groin region actually resembles the face of the great Belgian cyclist Eddie Mercx.

As you can imagine, when a tough race like this comes to an end, the riders tend to get a little loose. Mike Tomalaris himself seemed a little stunned at the level of intoxication that our table had managed to achieve prior to the awards dinner commencing. Once it was over and each finisher had received their actual ‘crocodile trophy’, it was back to the caravan park to relax over a few more beers and cigarettes…what? Yes, that’s right, it appears that another famous European tradition, smoking, is even embraced by many elite athletes. A number of the top riders in the race were quick to ditch the protein shakes and whip out the darts as soon as the race was over. I didn’t see any of the Australians joining in and I must admit that I found it quite strange. I couldn’t think of many things more detrimental for a professional who’s main asset is a healthy body – that’s why you never saw David Boon trading in his VB for a XXXX Gold after a test match – some things are just too sacred.

Looking back on the whole event, I can honestly say that it was…arduous. Certainly an interesting experience. Would I do it again? Maybe. But before that decision can be made, the Fitzroy Revolution team will be busy with the release of their upcoming album…